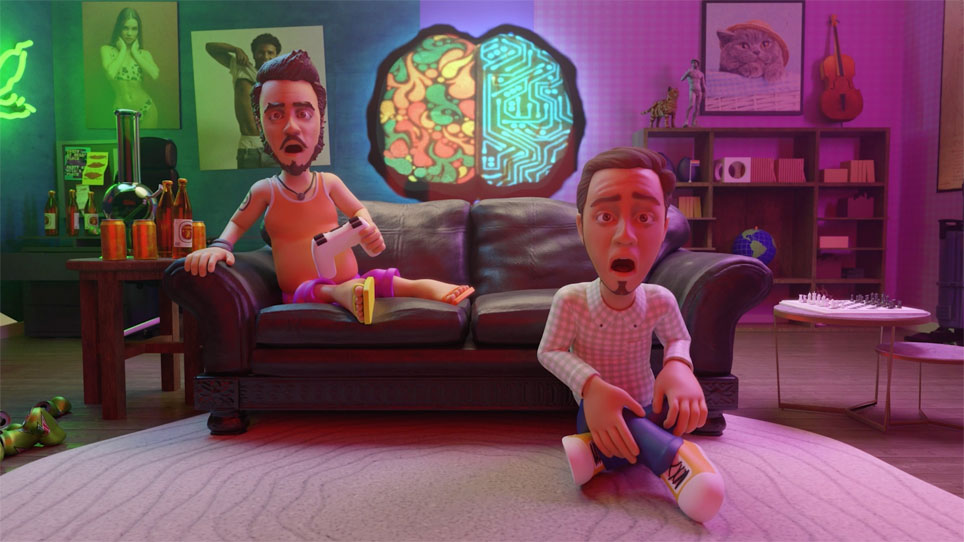 When anxious and quirky Raul accidentally schedules a date with a woman and a man at the same time and same place, he must resort to the bickering advice of Lefty and Righty, a 3D animated odd couple residing in his mind, who control him as if he's a role-playing video game.

RAUL PLAYING GAME finds its awkward, titular protagonist Raul alone at a bar. When his date Valerie finally arrives, we're introduced to Lefty and Righty, the two animated personifications of Raul's personality and inner-thoughts that inhabit a dorm room inside of his mind, and 'play' him as if he's a role playing video game.

As the duo debate between various dialogue choices and actions for Raul to say to Valerie in conversation, anxious Lefty wonders whether or not to reveal Raul's forbidden secret: that he is bisexual. Suddenly, Craig appears, and Lefty and Righty realize that they accidentally scheduled two dates at the same place at the same time! Raul must now continue through with both dates at the same time, with awkwardly hilarious consequences. 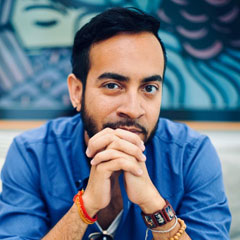 William D. Caballero is a Puerto Rican-American multimedia filmmaker, animator, and writer. He is a 2018 Guggenheim Fellow, 2021 Creative Capital Awardee, and two of his animated films have premiered at the Sundance Film Festival (2022 and 2017).

Born in Brooklyn, and raised in Fayetteville, North Carolina, Caballero received the Gates Millennium Scholarship and later returned to New York City for college (Pratt Institute ’06 and NYU ’08). His first film project was AMERICAN DREAMS DEFERRED, an autobiographical documentary about the various struggles affecting his family, that would receive the first HBO-NALIP Documentary grant and premiered nationally on PBS in 2012.

Committed to telling stories highlighting his Puerto Rican family, Caballero’s next project was GRAN’PA KNOWS BEST, a quirky web-series featuring 3D printed figures of his grandfather. The series was licensed as an interstitial series by HBO, and a spin-off short film of the series entitled VICTOR AND ISOLINA, debuted at the 2017 Sundance Film Festival, and the Museum of Modern Art. CHILLY & MILLY, an animated short film about Caballero's family, premiered at the 2022 Sundance Film Festival.